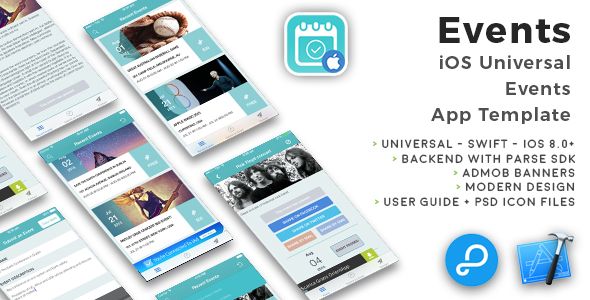 Events is a full app template for you to create your own mobile iOS app to store and share events all over the world. Users can submit new events to you and you can approve them by changing a value in the isPending field in your Parse Dashboard on back{4}app.

Since its backend is by Parse Server, you don’t have to buy any domain/hosting, there are NO php files to upload to a web server so you’ll save some money for server side.

You may also use the Adminca Panel as a great alternative to insert/edit data in your Parse Dashboard, after you’ll create your app on back4app, create a free account on http://adminca.com and create a new Panel, choose self-hosted Parse server and paste your Host, Application ID and Master Key in the relative fields (you can find them into Core Settings of your back4app panel)

Events has a button to automatically add an event on your native iOS Calendar app, open its address in Maps (to get directions) and share it on Facebook, Twitter or other apps installed on your device. It also checks if an event has ended by the date you’ll open up such event, showing you that it is passed.

About Parse SDK and back4app

Read this article for more info about back4app and Parse SDK: https://hubpages.com/technology/Parse-SDK-will-not-shutdown-in-thanks-to-back4app

Can I host Parse Server on my own server?

Yes, although I don’t provide support for the setup process, you can read the official Guide here: http://parseplatform.org

I get a Code signing error in Xcode 8.x

That’s a bug of Xcode 8 with macOS Sierra, check this sample video to see how to fix it: https://youtu.be/z2LemT1_LqA

How to remove AdMob banner ads

Check this video out to see how to remove the code that shows AdMob banners: https://youtu.be/e-HQYnta2Jg

Keep in mind that you must repeat the shown steps for every .swift file that contains this line on the top:

What about free support for this template?

I can offer free support for bugs encountered in the original code.
Instead, if you’ve edited the code and messed something up with it, I may apply some fee to fix it either via TeamViewer or by checking your app project files directly on my computer.

Should I use the latest version of Xcode to edit this template?

Yes, I always update my apps to the latest version of the IDE.