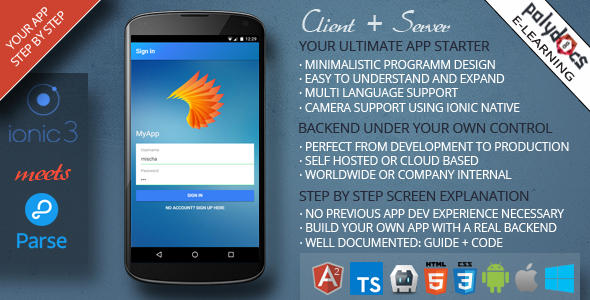 This online course is the best start you can get, if you are familiar with web technologies and want to start at zero to a fully working mobile application with ease!

You can also just use it as a solid APP STARTER, including multi language support & lightweight login system

Ionic 3 meets Parse is an Ionic App Starter including a complete Step by Step guide how to set up your own App infrastructure using Parse as a backend. This starter is perfect for every web developer who is familiar with HTML5 + CSS + JavaScript. The TypeScript part arround is easyly manageable after you did this kit. You will be easy able to create your own APP, which communicates with a server backend without any pre knowledge in backend systems.

Ionic is a complete open-source SDK for hybrid mobile app development. Built on top of AngularJS 2 and Apache Cordova, Ionic provides tools and services for developing hybrid mobile apps using Web technologies like CSS, HTML5, Sass and TypeScript. Apps can be built with these Web technologies and then distributed through native app stores to be installed on devices by leveraging Cordova.

Parse is an open source software that provides backend-as-a-service to native mobile or HTML5 applications in cloud-based or self hosted environments.

What is Ionic 3 meets Parse